Wow, the day that I have been building up to for so long arrived, the PPL skills test. 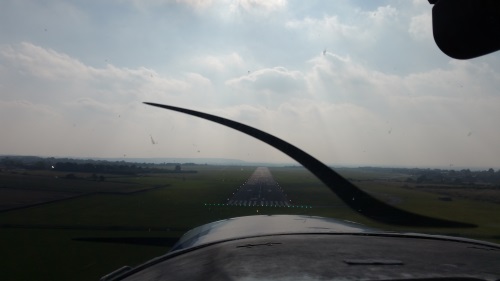 To say I was a bag of nerves was an understatement and that reared its head in my flying.
I only found out the test was defiantly on around 1.5 hours before I was due to take it. I arrived at the school and was given the route to plan and to also do the mass and balance calculations, so far so good.
The route was Olney -> Oakington -> Oundle. I took of and departed on runway 03 and climbed to Olney where I levelled off at my cruising altitude of 2500ft and started my stopwatch. I then flew the route and ticked off the points I should see, Bedford, St Neots, Oakington. En route I changed from Cranfield to Cambridge before reaching my destination of Oakington.
I then headed north-west towards Oundle and also changed to Conington radio. I realised I was slightly off  track at Alconbury and did the standard closing angle however I went back to my original track rather than correcting, however I made it to my destination on time.
When I arrived here I was asked to divert to Podington. Diversions are one of the things I have no issue with, so I did the diversion worked out my time and headed in the direction of Podington. Luckily I had been here before so I knew what I was looking out for and we arrived pretty much on time.
Once we got here I was asked to fly for a bit then I had “entered cloud”, my examiner forgot the foggles so he blocked my windscreen with the map. I did a rate 1 turn and did a 180 and got out of there, phew.
Next I was asked to locate where we were. I used the DTY and BPK VOR’s to work out that I was just by Bedford disused, which he seemed happy with. To be fair this part is pretty easy, just make sure you know how to use the VOR’s. My plane did not have a DME but if you did it would be even easier as that would also tell you how far you was.
I then was asked to do some steep turns, this is where things started to get interesting. I didn’t do an excellent job, at all, “damn” I thought to myself, but anyway more of the test to go. They were not terrible, I had just done better ones in training.
I was then asked to do a normal stall which I did and a base configuration stall which I also did. I was then asked to do a final stall which for some reason I pulled the nose up a little bit to high on.
Next it was PFL’s, the engine was cut, I trimmed for 65 kts and identified a field and tried to head for it. I made it but looking back, I could have done a better job and picked a better field.
After this he took control and we headed back to the airfield. We approached the VRP (Visual Reporting Point) and I was handed control again. I then headed back to Cranfield and just my luck I couldn’t see the runway! By the time I saw it I was rushed to set myself back up for the join, eventually I went on and did a standard landing.
Straight back up for a flapless and BAM, the examiner cut the power. Time to pick a field and go for it, I identified one and pitched for it when he said it’s time to go around. .
Next we set up for a flapless landing, I came in a bit too high and this affected the picture I was expecting to see and my speed was not as constant as it could be. However I adjusted and made it down onto the runway in good time.
Next up was a high glide, I cut the engine myself but I landed around a third down the runway, not ideal but perfectly valid.
Lastly was a low level circuit, I had only done one of these but I gave it my best. I was told to stay at 500ft which I did however on approach I was a bit too high, but I made it down to land.
It was getting late so my examiner taxied us back. As we both sat there before he got out I thought, I am not sure which way this is going to go. The navigation was good but some of the manoeuvres were not my finest.
I was told what I knew, some of the manoeuvres need practice, but I can get a pass.
I will do one more hour with my instructor to master these. I must admit flying with an examiner was a bit nerve racking compared to flying with my instructor but this is something I will have to get used to.
We went back inside for a debreif and really, I knew the areas I had to work on before he even started talking, it was basically everything I thought.
This is the longest flight I have done at two hours long and I must admit I was getting a bit tired by the end.
I am back up at the school tomorrow  to work on what he told me I need to with my instructor(s).
Anyways, it could be a lot worse! Now to start thinking about which ground school to choose!